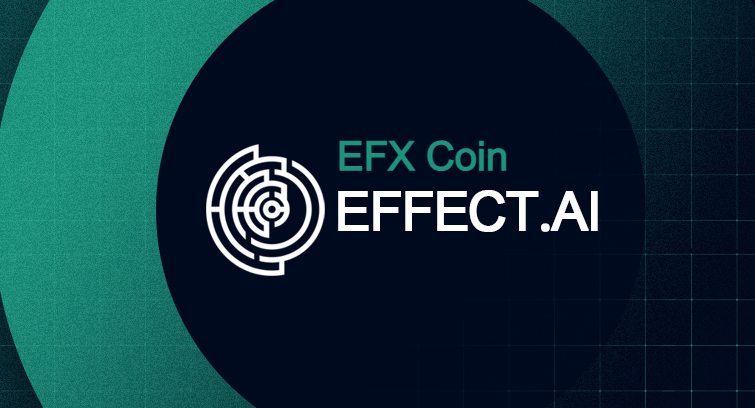 EFX Coin Price Prediction: Effect.AI (EFX) is a perfect combination of human and Artificial intelligence built on Blockchain technology. The project aims to launch an Effect network i.e. open-source, permissionless, and decentralized network for Artificial Intelligence. The ecosystem is followed by a 3-layer structure that includes dApps, Network, and Blockchain. where most of the platforms running on the Effect network will be based on smart contracts deployed on the EOS blockchain.

Project targeting main problems in AI technology including Data processing Diverging task and computational cost. We know AI is equally useful as well as equally problematic in real-world use. However, as per the study, most of the business data is useless and unstructured i.e. not readable for AI. So, Effect.AI proposed solution where thousand different language speaker that will collect and manage data and that will be accessible for human intelligence.

Effect.AI enables human-labeled data in which they wanted to provide a solution such as automated process, transaction, transcriptions, and other custom solutions. In the services project introduced features for different solutions include Effect Force (training data, survey, respondents, sentiment analysis), Effect Translate (offers solutions for businesses like subtitling, audio transcription, document translation in thousands of languages). YouTube Subtitle for easy understanding for viewers.

Effect.AI uses EFX as its digital asset that fuels the Effect network as well as gives power to Decentralized AI Development. EFX rewards or earns by user and developers for offering AI solutions on the platform. Effect developed AI Services marketplace where service provider and seeker can interact or buy and sell in which EFX will be medium of transactions. Effect.AI also offers computational resources and again EFX will use them to exchange money for computational power that helps to launch their deep learning framework.

EFX Token was indexed in 2018 and after being under developer for almost 1 year, as it was debuted after following great response in public offering event ICO. EFX in the run-on price graph following the neutral trend, where the most observed price is $0.0052 USD. however since march 2020, Effect.AI showed a bullish trend and after looking at the continued surge, investors started investing from the end of July 2020, which is clearly visible in the growth of market volume. so, in less than 5-month EFX surged from $0.0068 to $0.12 USD i.e. 1664% hiked in price.